The public laundry is an attractive construction from the XIX century that incorporates features of the former Franciscan Monastery erected in 1264 near to this site. Its Tuscan columns (XVI or XVII century) arparticularly impressive. They are integrated into the porched galleries that surround the tank and his water outlet.

The Flour Mill of Castelló was created on the site of the Molí del Mig, one of the three medieval mills of the town, using the former mill irrigation channel. It’s a large industrial three-storey building constructed around 1905 on the site of the original building. One can still see the original machinery, which is mainly made from wood, and was partially renovated in the middle of the XX century.

Today, the Ecomuseum-Flour Mill is assigned to the Museum of Science and Technology of Catalonia and shows how the wheat is transformed into flour using the Austro-Hungarian system. 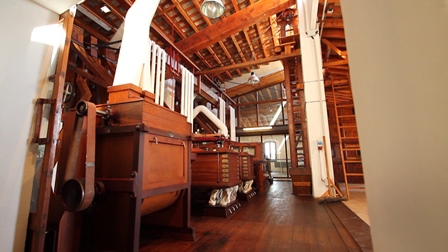 In this building, in the street dels Jueus on Era Mala hill, in the original medieval jewish quarter, there was the first synagogue or school of the Jewish community of Castelló. It recuperated his function in 1442, an maintained it until the expulsion of the Jews in 1492.

The important Jewish community in Castelló d’Empúries is documented from the middle of the XIII century. It enjoyed privileges granted by the counts and grew to have around 300 inhabitants. It was practically wiped out by the 1492 decree of expulsion issued by the Catholic Monarchs. The old Call was the area made up by the streets de la Muralla, dels Jueus, del Call, del Calabró, Peixateríes Velles and the plaça de la Llana, and it still has the irregular form from the medieval era.

A Gothic building constructed around 1336 that combined two functions of the medieval town: the Curia, which was the court, and the Prison, where the condemned where sent. On the south side, the facade of the Curia, which overlooks the square of Jaume I, formerly know as the Plaça del Gra, has restored Gothic windows and some outstanding corbels in his interior. The Prison’s facade on the north side has a voussoir portal and two barred windows. In the interior, small cells are distributed around the courtyard. Here one can still see the curious graffiti written by prisoners at different periods in history. 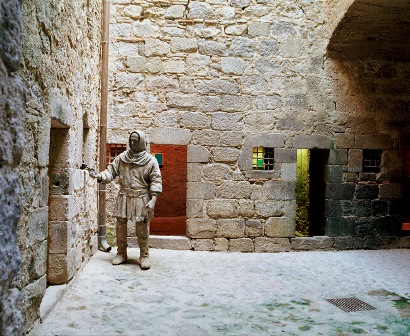 The Augustinian friars installed on the outskirts of Castelló in the XIII century and they moved into the town due to the wars of the XVII century. The church (built over some cellars) has the year 1749 engraved on his entrance and has an outstanding belfry. Since the disentailment of the XIX century it has been privately owned, together with the conventual building (Torrecabota House). On the church’s facade one can see a fragment of a Jewish sepulchral tablet.

The Dominicans founded their convent in 1317 near to the wall (“The Strenght of the Preachers”). The county palace, built in the second half of the XIV century, was lent to the friars by Count Pere II in 1401. The reconstruction of the convent in the XVII-XVIII centuries, incorporated a tower in the wall and other parts of the medieval construction, such as  the “Gothic room”. The church’s facade is classic Baroque style and dates from 1701. To its side there is a cloister, a type of courtyard, where there are some ancient, decorative and epigraphical pieces exhibited. Nowadays, the surrounding offices house the Town Hall and various municipal services. 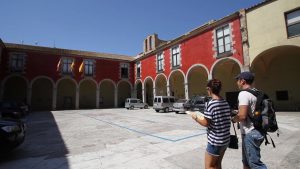 The Municipal Council Hall of Castelló or medieval Sea Exchange, later countinued as the offices of the Town Council. It still conserves the structure from the end of the XIV century (around 1393) with some renovation work completed in the XVIII century. Outstanding features include the facade with his large embossed shield, the internal space with his gothic crosspiece arch featuring the emblem on the lock and the lateral openings with columns and capitals.

The Castelló convent for the nuns of the Order of Santa Clare of Assisi was founded outside the town in 1260. It was moved within his boundaries at the end of the XVII century as a result of the disastrous effects of the wars. The building was constructed around 1683 and consist of a church with a single nave and a simple cloister with semicircular arched galleries, around which where the monastic rooms.

The Gothic parish church of Santa Maria has the structure and dimensions of a cathedral, an honour which it did not achieve despite various attempts by the counts of Empúries. It is one of the most interesting examples of Catalan Gothic religious architecture. Its construction started in the XIII century, continued throughout the XIV century and finished at the beginning of the XV century, when the facade with the outstanding marble porch was built.  The Mediterranean Gothic interior contains single Romanesque baptism fonts, an outstanding alabaster main altarpiece from the XV century, two sarcophaguses of local Counts, a Gothic stained glass window, an altarpiece from the XVIII century, an organ from the XIX century and many other fascinating features.  The belfry has Gothic decorations, although his architectural composition is influenced by the Romanesque belfries of Lombardy. It was probably built in the XIII century.  The Parish Museum exhibits, among other pieces, images, gold and silver objects, liturgical ornaments and archaeological pieces throughout its history. 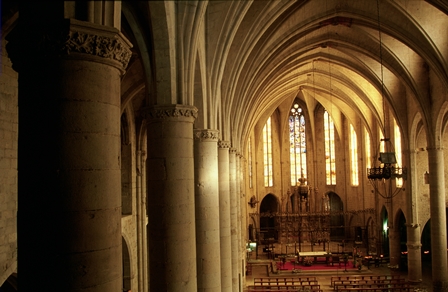 The Gothic district cross from the XV century is outstandingly scultured. It was located originally on the outskirts of the town and was also in the cemetery for some time, until it was moved in 1963 to his present site. On one side of the cross there is the Crucifixion, with the Holy Virgin and Saint John on his extremes, the pelican, allusive to the compassion and love of Christ, at the top, and the Resurrection of Adam, which simbolises the redemption , at his base. On the other, there is the Mother of God with the Son, accompanied by the tetramorphs, symbol of the Evangelists. On his center there are small images of eight apostles under canopies.

Set of Gothic arcades, partially rebuilt and often called “la Llotja” (the exchange). It could have formed part of the medieval customs house of Castelló or the wards of the Hospital Major( the hospice for the town’s poors that was founded on this site in 1252).

The Gallarda Gate, at the base of the rectangular or Gothic portal-tower, was the entrance to Castelló’s fortified enclosure from the upper side. It is above the mill irrigation channel which makes use of the ancient moat in the town’s best conserved section of the wall. It follows the high-medieval line and was renovarted in the XIII-XIV centuries. One can see this fortified section running up to the apse of the cathedral from outside the wall.

A residential building of the Castelló nobility in the Early Middle Ages. It is outstanding centerpiece of the town’s historical-artistic heritage. His austere facade, with a portal and two slim corniced windoes, marks this house out as a remarkable example of Catalan Gothic civil architecture (XIV or XV century).

The convent of Saint Bartomeu of Mercedarian friars was founded by Sant Pere Nolasc in 1238 on the outskirts of the town near to the Brigde of la Mercé, on the mill irrigation channel, in the era of Count Ponç Hug III. In the XVIII century it was moved into the town, near to the portal of the Holy Virgin, where it survived until the disentailment of the XIX century. In the courtyard of the Nouvilas house there are two galleries conserved of the elegant cloister of renascence influence, with low arches and Tuscan columns. It is an important and little known monument from Castelló’s cultural heritage.

The Asil Duran was inaugurated in 1898 thanks to the legacy from the local industrial philantropist Toribi Duran i Garrigolas (1814-1888) who had made his fortune in America and also founded the Asil Duran in Barcelona.The large eclectic building, which incorporates a chapel, is very characteristic of the era. the project is attributed to Enric Sagnier i Villavecchia. Nowadays, duly restored and modernised, it continues his social function.

The Old Brigde over the Muga, touches the ancient quarter of Saint Marc. It was originally named Major Brigde or New Brigde, although as there was not another older brigde, the name dissapeared. This medieval brigde has seven unequal eyes and appears to have been built in the XIV century in the era of Count Pere I. It has been repaired at various times due to the damage caused by wars and floods. 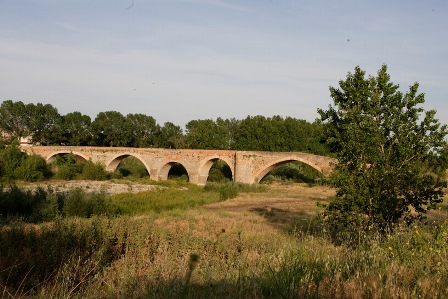 The tower or fusilier fort was built at the entrance of Castelló, next to the river, in the second half of the XIX century by the “Regiment of Toledo”, to renovate the town’s defences against the Carlists.It is a cylindrical and battered tower, with loopholes and embattlements. In november 1874 the “Fire of Castelló” took place, the bloody battle which was won by the Carlist force of General Savalls. It is notorious that half the town was destroyed and burnt. 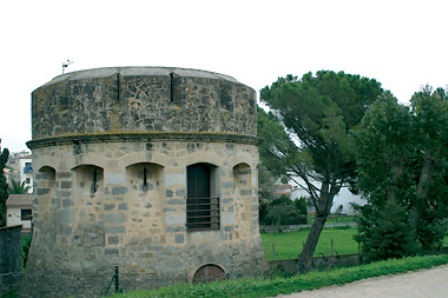 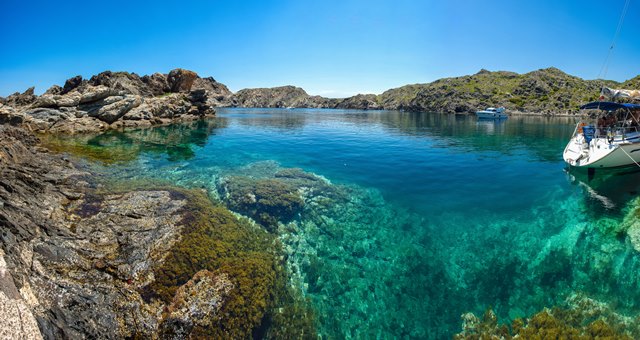